END_OF_DOCUMENT_TOKEN_TO_BE_REPLACED

I am packing for the weekend and watching a little TV news this morning, and from that box a witness to a fatal shooting in Louisiana offered this explanation for the dramatic killing of a black man by a police officer there: “Officers threw him to the ground, got on top of him and shot him dead.” So it would…
END_OF_DOCUMENT_TOKEN_TO_BE_REPLACED Years ago I was getting ready for a monster trial – pitting the ultimate power of the United States against a little guy who held out in the face of an all out attack on his home. People died. Protestors gathered. Television cameras rolled and major magazines wrote headlines in anticipation of an almost certain end. Tanks and helicopters ferried officers  and snipers about until the thing finally ended.

As the time for trial neared – nearly nine months after the siege – the question of whether we could settle the case arose. The Sage – a burley mountain man of a lawyer who was our leader – looked me square in the eyes and said it best:

"We only go to trial if we have to. If we can settle any case and walk away with our heads up, that’s what we do."

To win your case at trial you have to know if it can be won. Then again – what is winning?

If you are charged with aggravated assault with a deadly weapon (pointing a gun at someone, a felony) and the government offers to accept a plea to simple assault (a misdemeanor), should you go to trial? I suppose it depends on your tolerance for the pain of a possible felony conviction. Sometimes you know that what you did went too far, and you can swallow a little crow and pay a small price to avoid the possibility of a felony conviction. Sometimes you can’t. And sometimes the government makes that decision for you – they refuse to negotiate and settle.

Then you try your case.

Here’s the starting point: is there an alternative to trial?

Last summer we prepared for a wrongful death trial in Wyoming. Our clients had lost their son while he was skiing at a well-known ski resort. This was the second such case we had handled against that resort in the past five years or so. In each case, the lawyers were the same, the decision-makers were the same, even the experts were the same. Two lives lost. Families destroyed. The ski industry almost never settles until you are almost at trial. They spend money defending their industry, even in the face of an unnecessary death.

The case settled just a few weeks before the trial was to start. Why? Because each side understood the risk of going to trial. We all knew that juries are impossible to predict, regardless of how many mock trials or focus groups are done. And we did not have to try the case to win.

Our clients had already lost their son. They wanted a resolution that mostly included an acknowledgement of their loss and the defendants’ partial responsibility. A mediated settlement achieved that solution.

If you have a case – civil or criminal – and a trial is your only way out, by all means, go and fight and do everything you can to "win." But after 31 years in the courts, I can tall you the Sage is right. If there is another solution, explore that option first.

Think you have a civil case? Wrongful death? Personal injury? Wrongful discharge? Or a criminal matter? Maybe we can help you win – whether you go to court or not.

Dharun Ravi, 20, a student from New Jersey was recently found guilty by a jury in Middlesex County of bias intimidation, invasion of privacy, and hindering prosecution for using his laptop to secretly record and broadcast an intimate encounter between his Rutgers roommate, Tyler Clementi, and another man.

END_OF_DOCUMENT_TOKEN_TO_BE_REPLACED

The news today in the Statesman got it right – Zachary Neagle is still in custody – the judge having denied a request by the Idaho Department of Juvenile Corrections to permit him unsupervised home visits. The story implied that Zach had asked for the sessions, but he had not. We did not file the motion, it was filed by…

END_OF_DOCUMENT_TOKEN_TO_BE_REPLACED

The other shoe has fallen.  John Bujak, formerly the Canyon County Prosecutor, has been charged with Grand Theft by Deception and by Embezzlement, and the investigation of the case is set out in a detailed affidavit that is available online at the Idaho Press Tribune website, or here.  But before you think this thing is over, I bet there are more falling shoes in our future.  Here’s why:

First, the affidavit indicates that although Bujak maintained neither he nor his chief of staff Tim Fleming would profit from the contract between Canyon County and Nampa City, BOTH did profit and neither apparently thinks there was any problem with their conduct. Bujak told the investigators that the issue wasn’t whether he took the money, but rather, whether he was permitted to take the money. Apparently in his mind, those statements that he would not personally profit (the Canyon County Commissioners say that they were led to believe Bujak would not profit) were only intended to refer to his agreement to "not take a salary increase."  So the investigation reveals that as the money came in from the City, which believed it was going to pay the County, Bujak used the money for his personal expenses, transferring money to his own private accounts.  It also shows that in late March 2010, Bujak used the same money to buy a $10,000 cashiers check for Tim Flemming – Bujak’s former chief of staff. Why was the $10,000 cashiers check, purchased out of Nampa City funds that were intended for Canyon County, going to Tim Fleming? Gift? Bonus? Mr. Fleming may have some explaining to do.

Second, the affidavit indicates that the contract (Prosecution Services Agreement) was between the City of Nampa and Office of the Mayor, and the Canyon County Prosecutor and Canyon County. Bujak’s claim has been that it was a personal contract between he and the City. If the contract actually is not in his name, then the money is likely not his; it belonged to the County. All of this stuff will impact on the pending lawsuits and bankruptcy proceeding. That failure to disclose to the Bankruptcy Court that he had possessed and sold a Rolex watch, could still land Bujak in another criminal case – in federal court. And of course there is the divorce proceeding and Bujak’s lawsuit against protagonists Bob Henry and the Michaelson law firm – remember he said they defamed him when they claimed that he had received money that he wasn’t entitled to?  Kind of sounds like the charges of Grand Theft in the new criminal case, doesn’t it?

Third and foremost in my mind is the likely involvement of the Idaho State Bar.  Bujak has been practicing law on a contract basis while this has been pending. He serves as an officer of the court and his conduct is subject to review by the Bar.

Then again – I guess that potential fourteen years for each GRAND THEFT count will probably consume his time.  After all – he took the money – admits he got $236,000 from the City of Nampa that they believed was going to the Canyon County Prosecutor’s Office. The only question is whether he was ENTITLED to take it.

I bet Kerry Michaelson and Bob Henry will sleep a lot easier tonight. They called it years ago.

And Mayor Dale, City of Nampa, Canyon County Commissioners: who was driving that bus when each of you allowed this mess to go on for a year? Just how is it that Canyon County taxpayers got Bujaked on your watch? You’ve got some explaining to do, too.

If you have been injured by an Idaho state, county, or city employee and you want to bring a civil lawsuit for damages, you MUST file a notice of tort claim before you can bring a lawsuit to recover for your injuries. Even if the potential defendant is not an employee – you still must file the notice of tort claim to have a chance to recover money damages from injuries or death that resulted from a government employee or agent’s negligence.  The law in Idaho requires that the tort claims notice must be filed WITHIN 180 days of the date of your injuries. Again, if you do not file the notice of tort claims within that time, you HAVE NO RIGHT TO SUE.

If your case involves any of the following types of entities or their employees or agents, you will need to file a Tort Claims Notice before you can bring suit:

There is no "form" that is required for your tort claims notice, but it must include certain information including the conduct and circumstances which brought about the injury; the nature of the injury or damage; the time and place the injury or damage occurred; the names of all persons involved; the amount of damages claimed; the residence of the claimant.

This is a very important requirement that you may not get right if you rely on your own understanding of the law. If you get this one wrong – you have no case, so get some help. Call a lawyer who has experience with this. I have had to tell that potential client that his right to sue under state law was gone because he had failed to file a proper notice of tort claim, and that was a conversation I will never forget. So get some help.

KTVB news reported last night that all felony charges filed against five former Blackfoot high school football players have been dismissed, leaving only misdemeanor charges of battery. A few weeks ago the allegations gained international news status, and were discussed openly by national news programs and radio call in shows. Generally, the stories made it sound as if the school…

END_OF_DOCUMENT_TOKEN_TO_BE_REPLACED 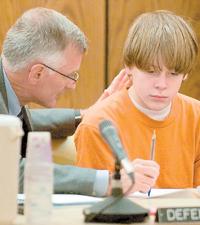 Just before Christmas I spent a little time with Zachary Neagle. When Zach was charged with the murder of his father in March of 2009, I followed the case with special interest. I am a dad and I could not imagine what might lead a kid to kill anyone – let alone his father. Fathers are supposed to be…

END_OF_DOCUMENT_TOKEN_TO_BE_REPLACED

Is a convenience store that sells alcohol to a minor liable for injuries caused when the minor, drunk and driving, injures or kills another? The answer is likely "yes."  I had an interesting call about such a fact pattern and did a little research to find a similar fact pattern, and there are plenty of them out there.